Overall assessment of the conference was very positive. The mix of academic presentations, activist discussion and artististic input kept the atmosphere of the event very lively and convivial. The tone of the presentations and discussion were more on building the alternatives and less on analysing the current problematic state of affairs. Though the alternative policy is still somewhat scattered and many internal differences are there, the exchanges in Malmö were by and large conducive of more unity in diversity.

Siemenpuu had registered session with this title into the activist stream of the conference to make voices from the South more visible in the conference. Another purpose for the session was to get inputs to Siemenpuu's planned Finnish language publication on systemic alternatives.

Marko Ulvila opened the session by explaining the purposes of the session and facilitating a round of introductions. Many of the participants came to the session clearly to hear from systemic alternatives and views from the South. Some had already experiences from such approach and movements and were keen to share their views.

Ashish Kothari presented the initiative Earth Vikalp Sangam/Global Alternative Confluence. The process of connecting alternative movements and initiatives has been in India with the name Vikalp Sangam since 2014. In Malmö, the first meeting to take the process to the international level was held. The idea is to bring together movements and thinkers from all spheres to share and build common synergies. An outline of the concept is below. 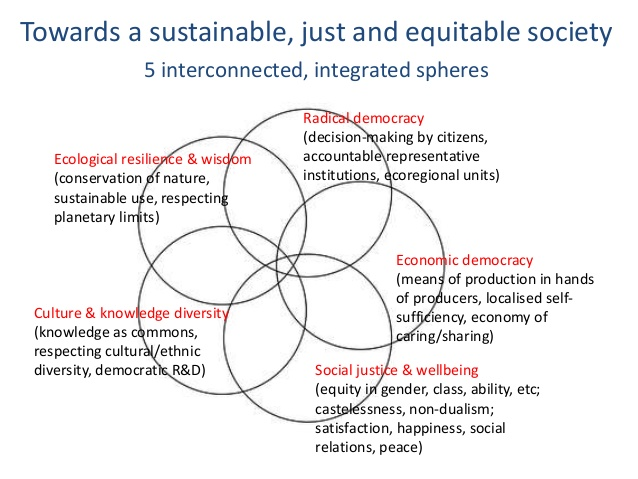 Ruby van der Wekken presented the commons approach with the case of Helsinki Timebank. She also made reference to complementary currencies developed in Kenya and discussions around them also in Mali. Ruby highlighted the idea of commoning, working together to protect and enhance the commons.

Uddhab Pyakurel from SADED-Nepal shared his opinion about the title ‘systemic alternatives’ arguing that most aspects discussed as ‘alternatives’ during the conference are not really alternative approaches, as many societies even today are using those aspects as their main strategy for survival: They grow their food for their own by following subsistence farming, they live ecologically without excessive use of carbon, they still have very powerful practice of solidarity economy, etc.

But the mainstream ways of living, which are considered ‘alternatives’ by  western society is becoming more unpopular in the south due to the intervention of capitalism through markets. Once market enters to their subsistence way of life, they need to calculate ‘profit’ and ‘loss’, buy things from market and jump to the consumer culture. That is why it is very essential for social movements of both global north and global south to organise forums i.e. discussion and exchange visits to encourage people to continue their lifestyles. For me, stories like how infrastructures like ‘wide road’ help further isolate the life of the inhabitants of suburb area, and make them dependent to hub of the city, successful stories of Western cities to convert motorable roads to cyclist/pedestrian ways, etc. will be eye opening for the people from global south to kill their aspiration to be ‘modern’ by following western model of development.

Martha Music from Attac told about the ongoing work with the Systemic Alternatives working group led by the Solon Foundation from Bolivia, Attac France and Focus on the Global South. The book Systemic Alternatives has received lots of positive attention and feedback. Encouraged by this a new book is currently being produced, again in several languages, with the element “action” added in the title.

In the round of discussion, questions like, “how does the consumer behaviour, especially refusal of consumption in the North, affect the life in the South?”, were asked. It is important to understand that the same alternative is maybe not suitable for all. It is important to identify the differences and the similarities and understand that despite the differences we still could have same values. Thus, it is important to make things visible and build bridges between our realities. We need to work together, and it was agreed that dialogue is excellent tool for sharing experiences and changing information.

To conclude, the session served very well the purpose of giving opportunities to participants from the South to present their views and get focused discussions on the alternatives on systemic level. The session spread information and therefore contributed  to at least two ongoing processes from the South aiming at systems change, namely the Earth Vikalp Sangam/Global Alternative Confluence from India and the Systemic Alternatives process from Bolivia. Insights from the session were put directly into use in the Siemenpuu's book project as well.

Videos of the main event of the Degrowth conference are available on conference's youtube channel.

On 20 September 2018, Siemenpuu, Fingo and The von Wright and Wittgenstein Archives of the University of Helsinki will organise a discussion on degrowth and the Malmö conference results. See more information from the facebook event.